For thousands of years, the Pug has been bred for the sole purpose of being a companion. He does not track, hunt, retrieve, point or herd. He loves. And he is happiest when he is loved in return. Few today will argue with the statement that the Pug is the companion par exellence.

Pug are marvelously adaptive and are anxious to discover and share your mood. The love to run loose (always in an enclosed area), to snooze in front of the fireplace or romp in the snow.

From rough play in the backyard or a tramp in the woods, to a gentle guardian of an infant or a patient listener to one`s problems, the Pug can be all things to all people. His foundness for children of all ages and his reliability as an companion to man are legendary.

As you walk trough your home, you will always hear the "click, click, click" of your Pug`s toenails as he follows close at your heels, wondering what you will do next.

Arguably, your Pug could be called a guard dog for he will certainly give voice when a stranger is approaching, but will seldom bark for no reason at all. 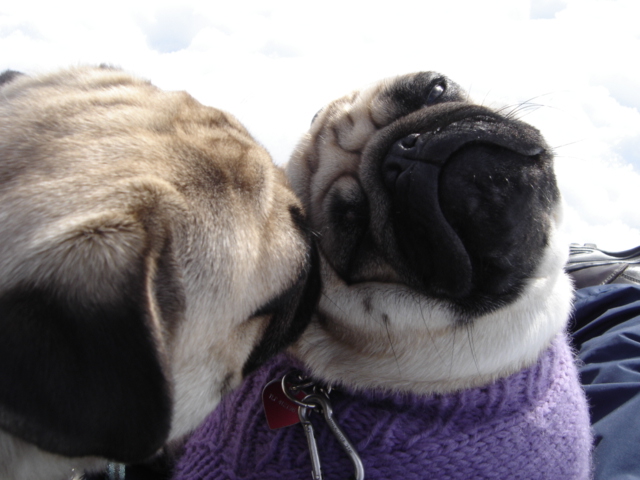 A breed standard - a detailed description of an individual breed - is meant to portray the ideal specimen of that breed. This includes ideal structure, temperament, gait, type - all aspects of the dog. Because the standard describes an ideal specimen, it isn`t based on any particular dog. It is a consept against which judges compare actual dogs and breeders strive to produce dogs. At a dog show, the dog that wins is the one that comes closest, in the judge`s opinion, to the standard for its breed. Breed standards are written by the breed parent clubs, the national organizations formed to oversee the wellbeing of the breed. they are voted on and approved by the members of the parent clubs.

STANDARD APPROVED BY THE AMERICAN KENNEL CLUB IN 1991

Symmetry and general appearance are decidedly square and cobby.

The Pug should be multum in parvo and this condensation of form is shown by compactness of form, well knit proportions and hardness of developed muscle. (Multum in parvi means that there is a great deak in a little package - a compact, well-proportioned little dog with a big heart).

The head is large, massive, round, The eyes are dark in color, very large, bold and prominent.

The neck is strong and thick with enough lenght to carry the head proudly. The short back is level from the withers to the high tail set. The body is cobby, wide in chest and well ribbed up.

The legs are very strong, straight, of moderate lenght, and are set well under. The shoulders are moderately laid back.

The coat is fine, smooth, short and glossy, neither hard nor wolly.

The colors are silver, apricot-fawn or black. The silver or apricot-fawn colors should be decided so as to make the contrast complete between the color and the trace and the mask.

Viewed from the front, the forelegs should be carried well forward, showing no weaknesses in the pasterns, the paws landing squarely with the central toes straight ahead.

Pugs can detect movement at a greater distance than we can, but they can`t see as well up close. They can also see better in less light, but can`t distinguish many colors.

Pugs have fewer taste buds than we do, so they`re likelier to try anything - and usually do, which is why it`s important for their owners to monitor their food intake. Dogs are omnivorous, which means they eat meat as well as vegetables.

Pugs are social animals and love to be petted, groomed, and played with.

A Pug`s nose, like that of other dogs, is his greatest sensory organ. A dog`s sense of smell is so great he can follow a trail that`s weeks old. Because the Pug`s nose is pushed in, his smell isn`t as great as his longermuzzled cousins, but he`ll still find lingering crumbs as well as the next dog!

Pugs can hear about four times better than we can, and they can hear high-pitched sounds especially well.